Global B2C e-commerce of goods and services continued to grow significantly last year. The actual growth rate amounted to 24.0% in 2014, which was in line with preceding years. As a result, B2C e-commerce sales reached $ 1,943bn. For 2015, the B2C e-commerce growth rate is expected to decline considerably, as the market is growing more and more mature. However, it will still grow by double digits (around 16%), resulting in a turnover of $ 2,251bn.

These are the findings by Ecommerce Foundation, a research-oriented  spin-off of the European branch organization Ecommerce Europe, a business partner of Salesupply, in the latest Global B2C E-commerce Report 2015.

“In 2014, 2.64% of the world’s GDP was spent on purchasing goods and services online,” says Jorij Abraham, Director of the Ecommerce Foundation. “At first glance, this does not seem as a lot, but this share has grown by more than 100% since 2010. This indicates the enormous growth of B2C e-commerce over the last few years.”

Asia-Pacific remains at the top 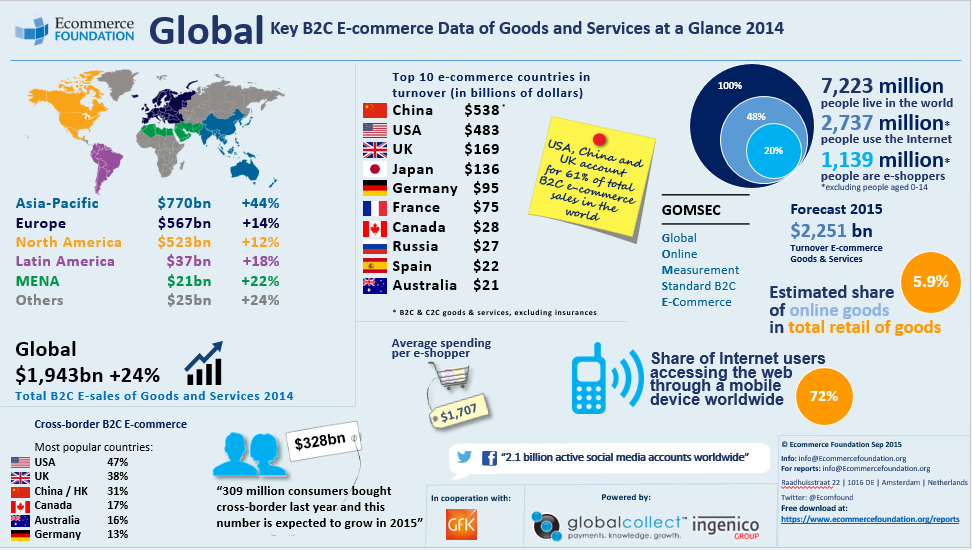 These large differences are interesting, especially when considering the region’s relatively faible Internet penetration rates. Whereas in the more developed regions of Europe and North America, around 75% of the population is connected to the Internet, only 39% of the Asian-Pacific citizens is able to go online. In combination with the increasing income per capita and improving retail infrastructure, Asia-Pacific’s B2C e-commerce turnover is expected to rise even more strongly in the near future.

Despite the low Internet penetration, Asia-Pacific still has the largest number of e-shoppers. This is because more than half of the world’s population lives in this region. In total, 523.1 million Asian-Pacific citizens purchased goods and/or services through the Internet. In Europe, this number amounted to 273.9 million e-shoppers and in North America to 195.5 million.

Behind these two major markets, the United Kingdom ranked third, with a B2C e-commerce turnover of $ 169.0bn. Yet, in terms of average spending per e-shopper, the UK leads the way. In 2014, British e-shoppers each spent $ 4,082 on average. American online shoppers ranked second with $ 2,888, followed by the French with $ 2,126. China is somewhat lagging behind, but at $ 1,703, the average spending per e-shopper increased by more than 55% in 2014. As a result, China is closing the gap here as well.

Do you need help assessing which markets offer your company the best growth potential outside your home country? Our Salesupply experts are ready to advise you and evaluate you possibilities! Get in touch now!

More worldwide e-commerce facts and figures can be obtained for free by downloading the light version of the Global B2C E-commerce Report 2015 and the free infographic. In addition, the complete report can be ordered through www.ecommercefoundation.org.